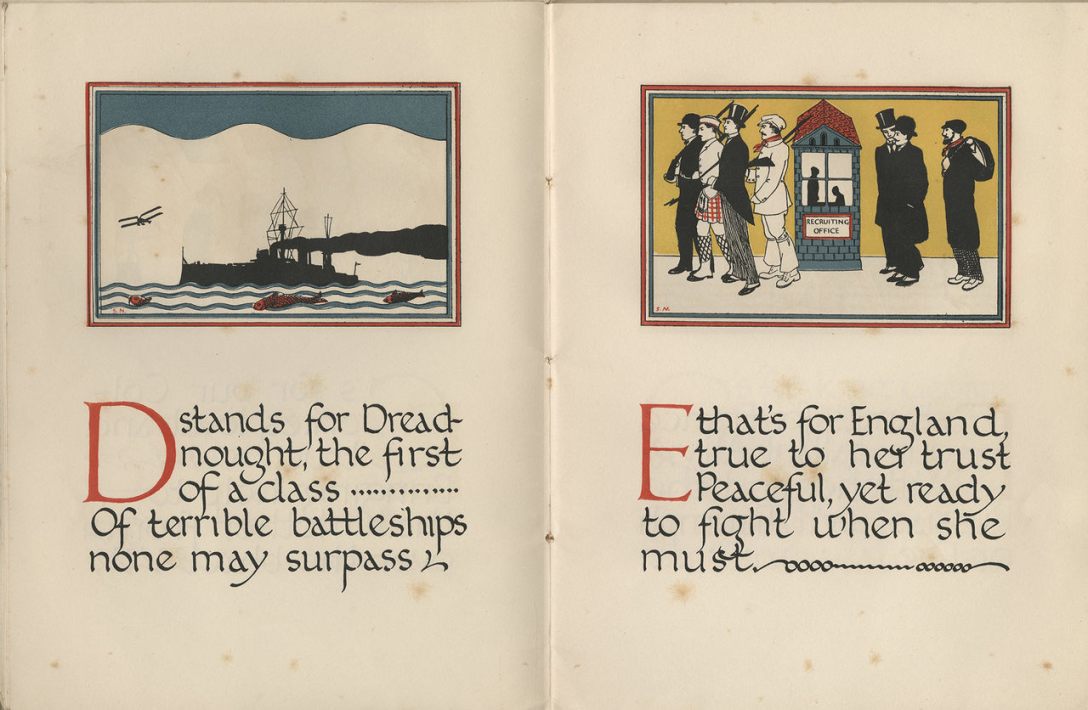 The Child’s ABC of the War exemplifies the romanticisation and normalisation of war propaganda within educational systems. Geoffrey Whitworth was an Oxford-educated publisher and founder of the British Drama League. Unfortunately, little is known of his personal authorship outside of theatre work, as his life’s main focus was the creation of a national British theatre. Whitworth’s upper-class upbringing and education during the glory days of the British Empire can be seen to have informed his perspective of the nature of the war. The Child’s ABC of the War intended to propagandise young children about the Great War from the traditional imperialist British perspective in what was considered a ‘child-friendly’ way. This source is somewhat of an outlier in British wartime literature, as war books during WW1 were mostly written for teenagers as the ‘younger audience’ in mind, rather than schoolchildren. Due to the impressionable nature of the target audience for the ABC, Whitworth was able to impart highly nationalistic ideas during the formative years of the intended reader’s life.

As the purpose of the source was to propagandise young children through their education, the examples used for each letter of the alphabet reflected Whitworth’s own personal education as a citizen of the British Empire. The illustrations and accompanying text perpetuated romanticisation of war by the middle and upper classes of society. Whitworth’s views can be seen through the examples used in the book, from which an overwhelmingly patriotic ideology is used to explain the outbreak of World War One to children. Whitworth’s ABC appealed to children through use of simplistic phrases, rhyming verses and colourful illustrations. As children develop their literacy and understanding of the world, this is the stage of life in which the texts consumed have the greatest psychological impact.

The mythologisation of the British Imperial Forces can be viewed through the lens of volunteerism in military service and the social behaviours which followed. The entry for ‘N’ depicted children in mock military uniform and was accompanied by a rousing statement of national solidarity and strength. This entry in particular demonstrated the ability of language to envelop children in wartime nationalism from their earliest years. Furthermore, the entries for ‘E’, ‘L’ and ‘Y’ promote volunteer military duty as an act of patriotism and nationalistic pride in the British Empire. In 1914, the British army was comprised exclusively of volunteers, colloquially referred to as “Kitchener’s Mob”. Kitchener himself is featured in the ABC as the entry for ‘K’, shown in full decorated military uniform and referred to as the ‘schemer of doom’. Whitworth’s voluntaristic appeal to children in these entries can be understood as uniquely British propaganda in that they were, until 1916, the only Entente power in World War One without a conscript army.

The Child’s ABC of the War was also expressly British in its active demonisation and ostracisation of the German forces due to steadily increasing tensions between the two nations throughout the 19th century. Entry ‘I’ showed a German soldier riding a four-headed dragon, while entry ‘U’ described German forces as ‘black-hearted’. Entry ‘Q’ simply belittled the Germans and made them out to be of lesser intelligence due to their military strategy. Contrary to the tactic of British adversarial patriotism, the Germans were unwilling to use disparaging phrases and statements in relation to the British, as set out in the Convention (IV) respecting the Laws and Customs of War on Land. Despite that both the United Kingdom and Germany were signatories, only Germany officially ratified the Convention; Germany could not react to British propaganda with their own, ‘it can only defend itself with deeds’.

This source is incredibly useful as historical evidence as it is emblematic of the excitement and romanticisation of war perpetuated by British societal elites, and as experienced by Whitworth throughout his life. The Child’s ABC of the War utilised conventional authorship tactics of children’s books and juxtaposed presentation with the confronting content of the book itself. The ABC explored themes of war and education throughout, which allows historians to understand the perspectives, values and ideology of 20th century Britons.  Putting oneself in danger for their country was considered the highest form of valiance that a citizen could display. Whitworth used loaded adjectives such as ‘loyal’, ‘daring’ and ‘proud’ throughout the ABC as descriptors of British soldiers. These men were regarded as protectors of their homeland; propaganda posters aimed at young adults often invoked patriarchal ideals of traditional masculinity, which can be seen reflected for children in the ABC under entry ‘W’.

As the very concept of propaganda ‘violates one of the foremost tenets of democracy … that of the educated population making decisions based on facts’, it is important for historians not to discard this source as blatant propaganda as it is recognised as now, but to read it as an understanding of how patriotism was ingrained in the education system during wartime.

Evans, Suzanne. Mothers of Heroes, Mothers of Martyrs: World War I and the Politics of Grief. Montreal: McGill-Queen’s University Press, 2007.

Kingsbury, Celia Malone. For Home and Country: World War I Propaganda on the Home Front. Studies in War, Society, and the Military. Lincoln: University of Nebraska Press, 2010.

Von Bethmann-Hollweg, Theobald. “Germany Warns World Against Falsehoods Told About Her in the Press of Her Foes”, The New York Times, August 23, 1914. https://timesmachine.nytimes.com/timesmachine/1914/08/23/104635747.html?pageNumber=1

1 thought on “Education, Propaganda and Patriotism during the Great War in Britain”