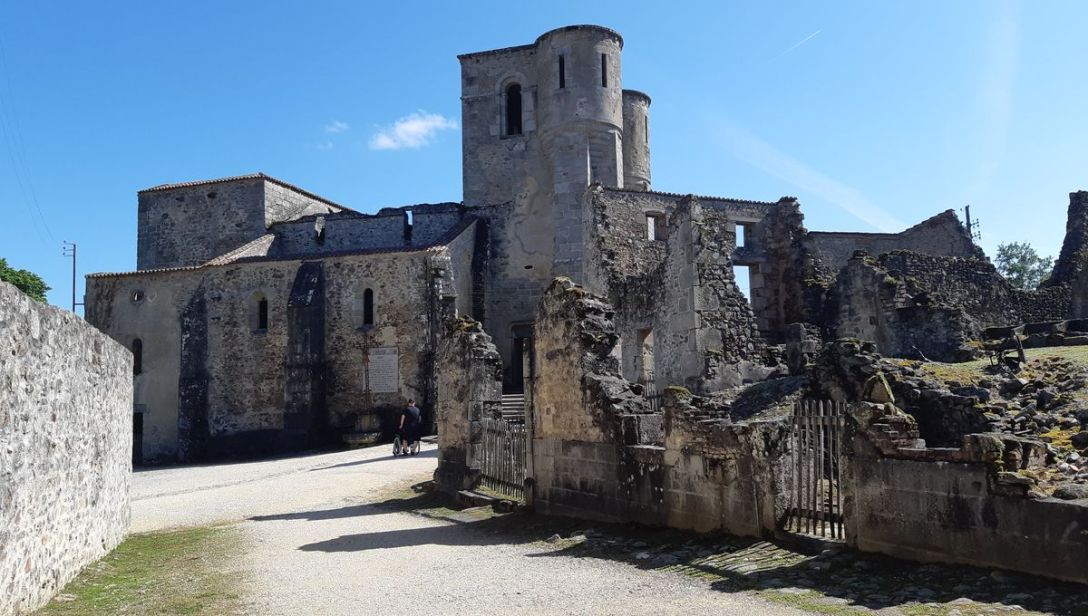 Have you ever had a travel experience so significant that it left an indelible scar upon your life for over a decade? My first visit to Oradour-sur-Glane did just that. When I was 11-years-old, I spent a family holiday with my parents in the French province of Limousin where a close friend lived. With not a great in deal in the way of tourist attractions to offer, my parents decided we would visit France’s most child-friendly holiday location! The haunting ruins of a village decimated by the Nazis.

It was fair to say I was not emotionally or mentally mature enough for what I found on our trip, but it was an experience I would never forget. Those township roads, the tram lines, the gutted out corpses of buildings have stayed with me for the better part of ten years. Hell, I even wrote a song about it for my high school rock band. I could not expunge this place from my memory.

That’s why, a whole decade later, I decided to return to Oradour-sur-Glane. Accompanied by my girlfriend this time around, we set out from Limoges by car and arrived there within half an hour.

My memory of the fine details were hazy to say the least. I was expecting to find the ruins a good distance away from any modern settlement. But as we approached we saw the ruins rise out of the hillside on our right, adjacent to a bright, new township. It had been built right next door to the ruins. It was also called Oradour-sur-Glane.

We parked and walked to the front gate. What stretched out in front of us was the outskirts of what was once the original town, a straight road paired with overgrown tracks that were accompanied by the overhead tram lines above. There were only a few buildings in this part of town. Namely a roofless brick construction with visible fire damage searing around the front windows, painting the shop’s name in charcoal black: “Postes, Telegraphs et Telephones”.

The tram tracks diverted further up, running beside a small building surrounded with bright grass. It was once the station for Oradour-sur-Glane, but the only remnant of its use were the letters “O-R-A” and “G-E” plastered in tile above the entrance way.

It was a brisk January day with the sky flashing between spots of warm light and jackets of grey clouds cloaking the sun. Shivers would periodically run down my spine, but often this was nothing to do with the weather. We trod slowly down the almost vacant walkway, feeling something akin to sedation as the gravity of what occurred in this place started to set in.

When France was defeated at the dawn of the Second World War, this area fell under Nazi control. But many resistance fighters pushed back. Four years into the occupation of France, Nazi enforcers uncovered information that a Waffen-SS officer was being held prisoner by members of the French resistance in a small provincial town called Oradour-sur-Vayres. The similarity of the two towns’ names would lead to a colossal mistake.

We passed a garage, then a pharmacy and also a school. Often the only clue as to what these husks once were was provided by the plaques attached to walls. Scrap metal that had survived the original burning and the decades of exposure to the elements lay out in the open homes. Twisted bicycle parts, rusted stoves and dilapidated bed frames. And in the open square, which was once the bustling centre of town, lay the browning corpse of an automobile, puncture holes dotting the bonnet.

It was the 14th of June 1944 when a headstrong SS-Sturmbannführer Adolf Diekmann led his battalion to seal off the wrong town named Oradour. All of the men were forced to stand in the town square and separate barns. Here they were all shot in the legs and then set alight with engine fuel and matches. 190 men were killed this way, right where we were standing.

I could feel the life drain from me. An intense feeling that I could not describe washed over me; grief for people I never knew. I put my hand on the side of the car. An unlikely monument for such an unnecessary massacre. It was the one thing I remembered the most from my first visit here. “Shot and rusted car, never forget where you are” were the lyrics from the song I wrote with my high school band. It was true, the memory of this car had been something I could never forget through all those years.

We eventually arrived at the old church in the far end of town. Inside it didn’t look like a church that had been in regular use only 70-odd years ago. It had more in common with ancient Roman ruins than 20th century France. Like most of the buildings the roof was completely gone, scorch marks lining the edges of what was once the ceiling. No furniture was left, aside from a confession booth, and the bell that once tolled in the church’s tower was beside the front door, horribly disfigured by fire.

As most French men were away fighting, the overall population of Oradour-sur-Glane mainly consisted of the women and children left behind. While the remaining men were being shot, more than 450 women and children were locked inside this church. An incendiary device was lit beside it, setting the whole building ablaze. Women and children tried to escape, but were knocked down by machine gun fire when they tried to flee through the doors and windows. Only one woman survived.

Wind whistled through the open hollows of the church. My girlfriend and I couldn’t stay inside very long, as the weight of what happened here weighed too heavy on us. We sat outside and took a moment to breathe.

We needed some cheering up, so we decided to head to the graveyard. Yeah, there’s really no chance of feeling happy in this place. This cemetery spread out wide, hosting the final resting places of the 642 lives lost in the massacre.

Beside the cemetery was an underground mausoleum, built recently to house the personal remains of the victims. Within this white marble labyrinth, my girlfriend and I split up to look at the encased artefacts, such as smashed eyewear, children’s toys and the charred fabrics that were once people’s clothing.

Staring down at these belongings in a small alcove, I heard my girlfriend walking on the ground outside. Then the sound of footsteps continued down the stairs to the underground mausoleum. She called my name. But not from the stairs. She was in another part of the mausoleum, further inside. The footsteps stopped and then left the stairs behind.

My girlfriend found me again in the alcove and asked why I had gone up and down the stairwell. I told her I hadn’t. I thought those footsteps were her’s. She said she had been nowhere near the stairs.

We rushed upstairs to the open ground and looked around. But there was nobody in sight. The cemetery was vacant and the field of grass that the mausoleum was constructed underneath was devoid of any human presence. The person, whoever they were, had completely vanished.

Neither of us are ones to believe in apparitions or ghosts, but we couldn’t help but feel creeped out. Our nerves were truly on edge at that point. We decided to make our way slowly out of the town.

As we walked, my girlfriend stopped by what was once a café. She pointed at the bright rusted pulley used to extend an awning across the shopfront. Giving shade to ordinary people sipping their coffees at small tables, peacefully watching as mothers pushed prams and children played in the streets. We held each other and cried.

We can see now that Adolf Diekmann’s orders to decimate the town were clearly crimes against humanity, but you’d be surprised to know that this opinion wasn’t developed with hindsight. German Field Marshal Erwin Rommel, General Gleiniger, the commander in Limoges, and even the Vichy Government protested against Diekmann’s senseless act of violence, intending to reprimand him for what he had done. But justice was never served. Diekmann died in the Battle of Normandy shortly thereafter, along with the majority of his battalion. No-one was ever brought to justice.

The temperature had dropped drastically since we arrived and our fingers were icy cold. Eyes red, our noses dripping. As we walked back where we first came, we couldn’t help but notice a strange recurrence. Sewing machines. Their easily identifiable outline marked the husks of the houses where women would have darned socks for their husbands at war or little scarfs for their small children. They stared at us with their smooth but inanimate bodies. “You will never forget us,” is what they seemed to be saying. They were right. I never will be able to purge this place from my mind, I thought as we walked along the unused tramlines. Oradour-sur-Glane will continue to cast a haunting shadow across my life for another ten years or more.

As we came to the exit we saw three little brown things hurry away into a drainage hole. We stopped and watched the drain in complete silence, waiting for whatever it was to return. In a minute, three marmots slinked out of the drainage hole and cautiously trod across the field. They squeaked and nibbled at the grass near our feet.

Nothing could undo the wrongs done to this town, but life had found a new home in Oradour-sur-Glane.