Within late medieval Europe, gender fluidity was often understood in terms of transgression or rejection of prevailing social, political and theological expectations. While social performances of gender were heavily influenced by a strict gender binary, some miracle stories provided a space where gender fluidity was more acceptable and could even be the basis of sainthood. This piece will investigate fluidity within late medieval Europe through the case of St. Wilgefortis, a bearded female saint who emerged in the fifteenth century. She serves as an interesting example of fluidity across both gender and sex as she rejected feminine social roles, and physically grew a beard. I examine the potential factors contributing to her legend’s development and celebration, considering how it transgressed late medieval understandings of sex difference, while simultaneously reflecting some theological assumptions surrounding gender. Wilgefortis’ visible gender fluidity and how it was perceived within real-world worship will also be explored, demonstrating how the transgression left the miracle story vulnerable to criticism and dismissal, contributing to its decline in popularity.

The medieval understanding of gender and sex difference was heavily influenced by classical ideas reinterpreted through a Christian lens. The Galenic ‘one-sex’ model, as characterised by Thomas Laqueur, was based on notions of a biological sameness, rather than a clear binary division, between male and female reproductive anatomies. Within the individual, “varying degrees of masculinity and femininity” could be displayed. The Aristotelian ‘two-sex’ model, which had increased in popularity during the thirteenth century, emphasised biological sex difference informed by both internal or external genitalia and the humoural balance. This balance considered the body’s natural equilibrium of blood, phlegm, black bile and yellow bile, which contributed to physical characteristics that marked individual gender. Women were naturally colder and wetter than men, “whereas men were hot and contained.” The growth of body hair was a physical manifestation of this two-sex model as well as a symbol of masculinity. Indeed, the production of body hair was attributed to the balancing of male humours, as excess heat escaped through pores and facilitated hair growth. Within both models, as well as many theological constructions, the male was the ideal form, at the top of the sex hierarchy, whereas the female was considered an imperfect male. Physical transgressions, a visual crossing of the sex difference, were largely understood through the lens of disfigurement, and were subject to fascination and repulsion. Indeed, these observable occurrences were marked as an “unacceptable hybridity” belonging to the realm of the monstrous.

The legends of female bearded saints do, however, suggest that there could be a relationship between excess hair and female holiness. Gender fluidity within miracle stories could be understood symbolically and even uphold religious ideals of gender. Within late medieval Europe, the bearded St. Wilgefortis was a popular religious figure whose miracle story revolved around a divine act of gender fluidity. The image of Wilgefortis first appeared around 1400 as a ‘female crucifix’ and developed throughout the fifteenth century. The figure was usually depicted “on a cross, wearing a crown, and often with a fiddler who serenades her from below.” Isle Friesen identifies the origin of St. Wilgefortis to a misinterpretation of a copy of Volto Santo. The image of a robed Christ was misperceived as a crucified, bearded female saint. Equally, Lewis Wallace argues St. Wilgefortis as a continuation of a series of “deformed” female saints which emerged in the thirteenth century. The later miracles stories of Wilgefortis had several common details:

A girl born to the pagan royal family of Portugal converts to Christianity and refuses to take a husband … Her father tries to force her into marriage and, upon her refusal has her imprisoned …  [She] prays to God to be transformed to become physically unattractive to her would-be husband so that she might remain a virgin bride of Christ alone. When Wilgefortis miraculously grows a full beard, her father has her crucified in a fit of rage.

For Wilgefortis, her beard is both a mark of disfigurement and symbol of divine protection. It is an intentionally monstrous, yet also miraculous phenomenon created by God that remains one of her most prominent features across varying depictions throughout the medieval and early modern period. As an example of divinely enabled gender fluidity within late medieval Europe, St. Wilgefortis encapsulates the complexity of sex difference as interpreted through a religious lens.

The legend of Wilgefortis, and the centrality of her act of gender fluidity, demonstrates the tension between medieval constructions of a gender hierarchy and the miracle stories of holy women. Gender was understood on both physical and moral terms, with female inferiority expressed within both Galenic and Aristotelian models of sex. Holy women, in achieving transcendence and overt divine favour, posed a challenge to this hierarchy. This theological problem could be remedied if holy women were understood as having ascended into the masculine side of the sex/gender continuum as personified through physiological characteristics. As such, Wilgefortis’ beard was perhaps an exhortation intended to portray masculine qualities, thus explaining her role within the gender hierarchy as well as visually bringing her closer to Christ. Several other saints also received the “divine gift of a beard” including St. Paula of Avila and St. Galla of Rome, while St. Mary Magdalene and St. Mary of Egypt were similarly described as having grown “fleeces of body hair.” Wilgefortis’ gender fluidity is also expressed within her actions as she seeks to protect her virginity and avoid the traditional social function of marriage through the protection of God accessible within a pagan court. These transgressions were similarly justified by constructing Wilgefortis as a more masculine figure. Some legends describe her as part of a set of septuplets and, being in the centre of the womb, having been exposed to “a balance of heat and cold, which resulted in her having male attributes, such as the beard, and masculine qualities, such as distaste for marriage.” The de-feminisation of holy women, demonstrated through Wilgefortis’ gender fluidity, is a possible consequence of the conception of women as “an afterthought of the creator” and theologically inferior to men.

Within the legend of St. Wilgefortis, this de-feminisation was also conceived as a form of Christlike suffering. Rather than a painless, or even liberating expression of gender fluidity, her beard is intended to be repulsive and becomes the catalyst for Wilgefortis’ crucifixion. The beard of Wilgefortis is both a disfigurement and a divine gift from God. The radically transformative powers of Christianity are prominent throughout Christian doctrine; however, Wilgefortis’ transformation seemingly only increases her suffering. This paradox is reflective of the fifteenth century ideals popularised through the Imitatio Christi, a text that emphasised the importance of suffering as a means of spiritual purification. The text argues “the higher a person advances in spirit, the heavier crosses shall he often meet with.” The increasing suffering of Wilgefortis is a vital step for her eventual transcendence. While the prominence of the beard does vary between depictions, the crucifixion remains constant. This motif, in which Wilgefortis suffers “in cosmic unison with Christ on the cross,” reflects a common theme in which religious women’s bodies are directly associated with Christ’s. Wilgefortis’ body is, however, neither fully masculinised nor fully feminised. Her appearance and crucifixion tie her to the physicality of Christ, yet she is described as a woman, resulting in a blurring of her figure as a saint. Wallace argues Saint Wilgefortis embodies a multitude of characteristics from across the gender/sex spectrum: feminine yet virle, divine yet monstrous, Christlike and still a woman. This reveals the “fluidity and paradox common to late-medieval religious symbols.” The gender fluidity central to her sainthood furthers Wilgefortis’ suffering as well as binding her closer to Christ.

In practice, St. Wilgefortis enjoyed considerable popularity as a saintly figure across Western Europe. Regardless of her legend’s origin it has been argued that her continued depictions were part of a deliberate effort to “transcend the ‘gender gap’ inherent to the crucifix.” Effectively, Wilgefortis’ gender fluidity could perhaps be utilised to promote a more universally applicable symbol of divine healing. Indeed, Wilgefortis assumed the role of compassionate protector. Sometimes referred to as St. Uncumber, she “would assist her faithful protégés in their final hour, so that they could die ‘un-encumbered’ by grief and anxiety.” Friesen argues that this role explains Wilgefortis’ inclusion as a saintly protector within Henry VII Chapel in Westminster Abbey. Perhaps due to her highly visible gender fluidity, Wilgefortis’ role as a saint was not always described positively. Within post-reformation Britain, a growing connection between Wilgefortis’ patronage and women unhappy within their marriages was observed. In his Dialogue Concerning Heresies, Thomas More claimed that women referred to Wilgefortis as St. Uncumber “because they reckon that for a peck of oats she will not fail to uncumber them of their husbands.” Here, Wilgefortis becomes a threatening figure, her gender fluidity signalling her potential to allow other women to similarly destabilise the social order. Wilgefortis’ gender fluidity was both the driving force of her popularity as well a cause of growing suspicion. Miraculous gender fluidity was a complex act. Its divinity allowed for broad, often favourable, interpretations that reflected theological understandings of the sex hierarchy and divine favour. Like any depiction of social subversion, however, the ambiguity of Wilgefortis could be perceived as dangerous. 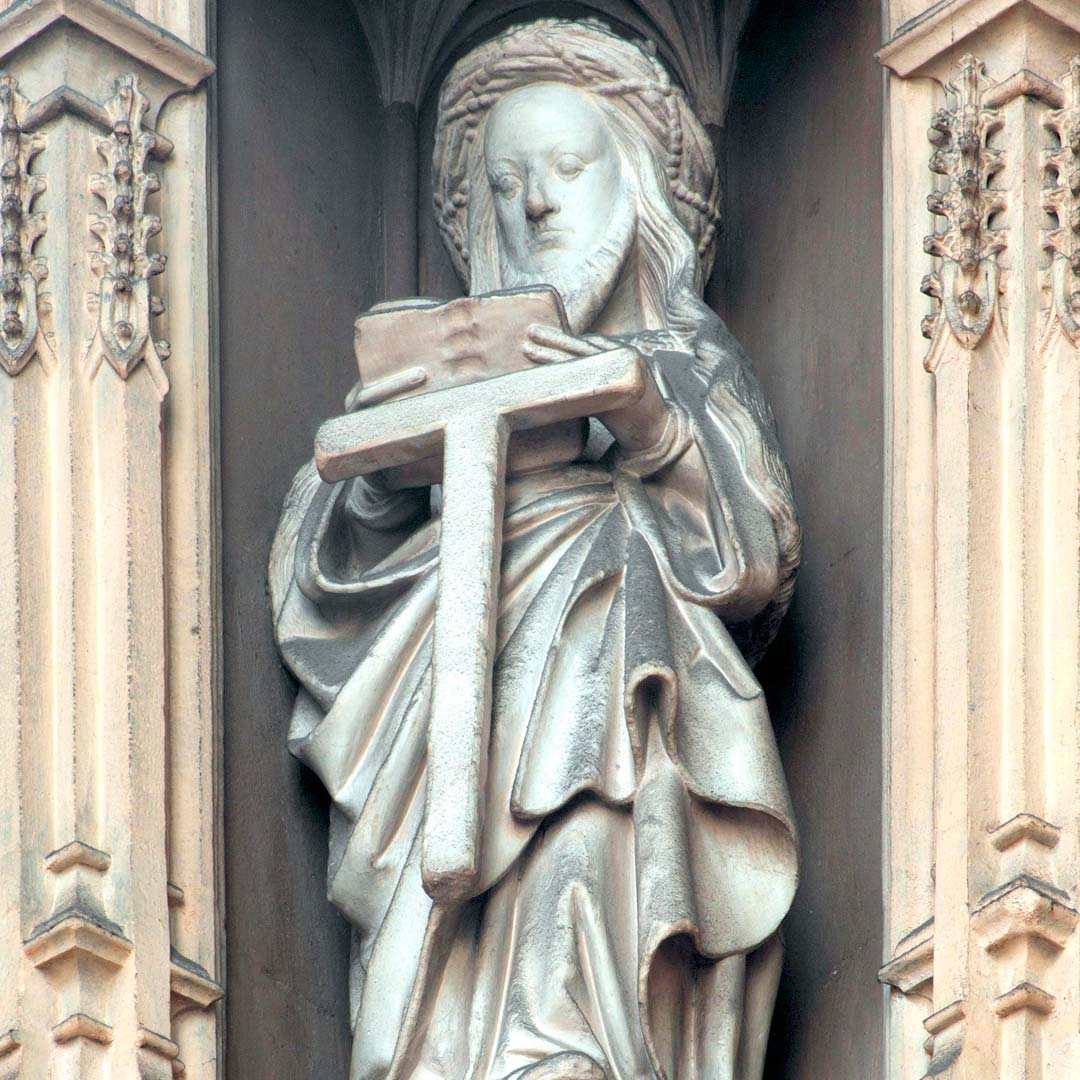 The gender fluidity of Wilgefortis suggests that gender binaries were complex and multifaceted within late medieval miracle stories. While the prevailing sex models did enforce a relatively clear binary of gender roles, it is evident that there was space, albeit through legends, for some fluidity. It is crucial that Wilgefortis existed through symbolic representation, creating the possibility for varying interpretations as to the meaning of her beard. Gender fluidity is arguably defined through ambiguity, effectively informed by what it is not. Indeed, Wilgefortis was neither fully feminine nor fully masculine. This universality was possibly interpreted as purely metaphorical or understood as a more threatening transgression. Regardless, the legend of Wilgefortis reflects the stories of many holy women who adopted various forms of gender fluidity and ambiguity as central to their transcendence to sainthood.