Aircraft were first utilised for war in the Italo-Turkish war of 1911-1912, however, the first major conflict to employ aircraft was World War One. As a result, it evolved heavily from the beginning until the end of the war and beyond. The war in the sky saw huge leaps in technology and the uses of aircraft across multiple theatres of war. However aircraft, mainly airships, proved to be a new threat for civilians, as they were able to strike cities which would otherwise be relatively far away from the conflict. It is important to understand the aircraft of World War One, as, thanks to the many lessons learnt from their use in The Great War, they would serve a large role in major conflicts throughout the 20th century. These lessons would then go on to shape modern military aviation across the world.

This piece will discuss aerial warfare during World War One. We will explore how the war in the sky changed from the onset until the end of the war. And in particular we will review a piece of art called “Airship 23”, which was a painting done by Alfred Egerton Cooper in 1918 and depicts an entente airship flying over the countryside (fig.1). With this painting in mind, we will explore the use of airships by the combatants of the war while also exploring the use of other aircraft and the advancement in air technology throughout. 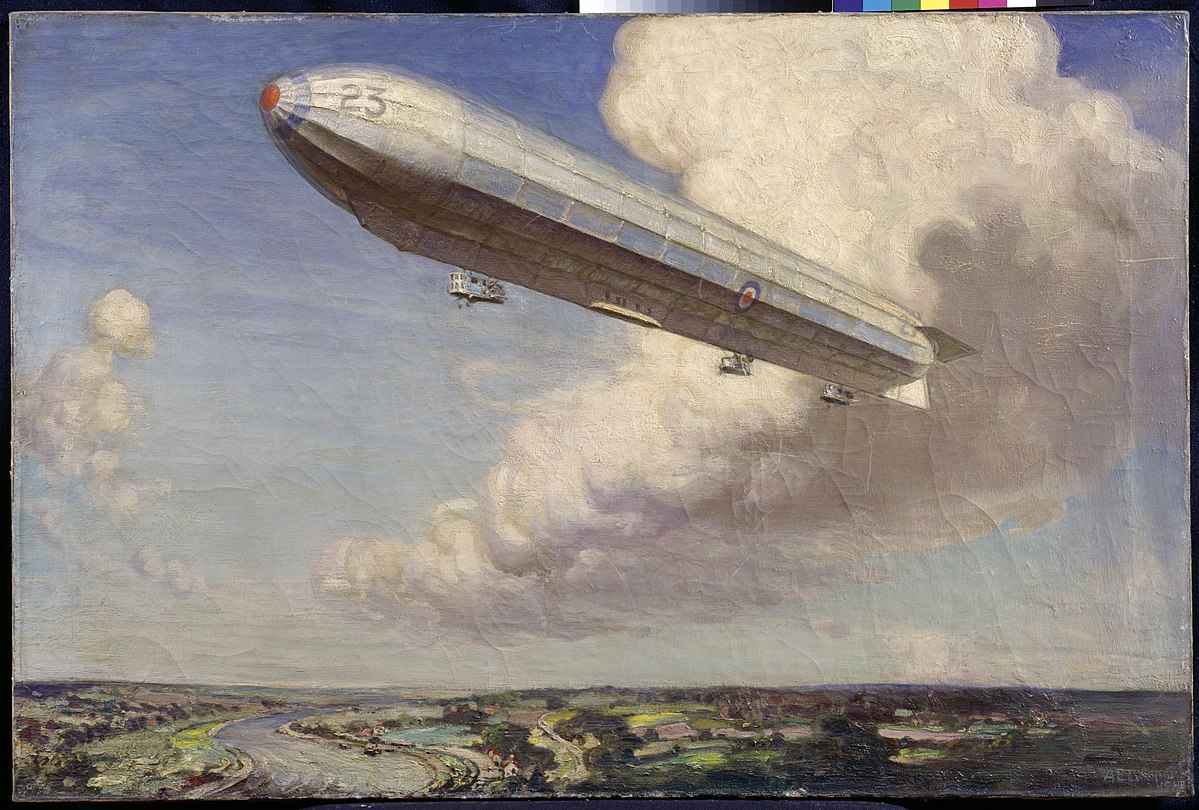 As seen in the painting (fig.1), the airship portrayed is Her Majesty’s Airship 23, which was of the twenty-three class of airships which were made for the Royal Navy to counter the threat of German Zeppelins. Airship 23 and its sister ships were relegated to use as experimental and training ships, however, as they did not carry enough fuel for reconnaissance purposes. Noteworthy experiments involving this particular airship were the successful tests in which, on November 3rd, 1918, under the command of Major Ivor C. Little, an unmanned Sopwith Camel was successfully dropped from 183m. There was another test on the 6th of November where Lieutenant R. E. Keys managed to pilot a released Sopwith Camel to a successful landing.

Besides being used as reconnaissance, experimental or training vehicles, airships were employed for bombing towns and cities, particularly by the Germans. The German equivalent of the Airship was the Zeppelin, so called as it was named after the German Manufacturer Count Ferdinand von Zeppelin, who was the inventor of the first rigid body dirigible airship. It is because of this that the word Zeppelin and airship are used interchangeably in modern times. On the topic of air raids, German high command knew that the British coastlines were very well defended and decided to go straight over the defences, high enough to go unimpeded. And so, on the night of the 19th of January 1915, the first air raid on British soil commenced in a town called Great Yarmouth. Germany’s goal with these air raids was to end the war quickly by breaking the spirits and morale of the British public, but as we know from the ending of World War, this plan did not work. In fact, the United Kingdom used early airship raids as propaganda to cause outrage against the Germans by highlighting the individuals killed during the attacks.

The utilisation of airships in attacking cities and towns was but one of the many uses of aircraft during World War One. Biplanes were often employed for reconnaissance due to the static nature of trench warfare; aircraft offered the only method in which combatants could gather information on the enemy and their whereabouts. Unlike today, information gathered could not simply be relayed through radio, instead pilots had to use weighted bags or message streamers. Later pilots and crew were equipped with reconnaissance cameras which allowed for more detailed information on the enemy to be gathered, which led to enemy troops and guns being forced to camouflage their positions, a practice that would continue in all modern wars. It became apparent to both sides that having control of an airspace was a crucial advantage and, as a result, the first fighters were born. The first fighter planes were biplanes with crude machine guns attached to them and these were used by all major nations in the war. A major issue faced by these first fighters was the machine guns damaging the propellers, so to overcome this, a new piece of technology, designed by French Engineer Raymond Saulnier regulated machine gun fire to fire between the blades of a propeller. This revolutionary device would fall into the hands of both sides of the conflict, however, and would go on to evolve through many iterations for years to come, long after the war till it was made redundant by rocket and jet-powered aircraft of the late 1930 and 40s.

As the war waged on, Entente and Central Powers engineers alike developed new designs for aircraft using streamlined fuselages and thicker air foils as well as more powerful engines, which led to the creation of bomber aircraft and ground attack aircraft such as the Junkers J-1 of 1915-1916 (which was first all metal aeroplane, and it paved the way for future all metal aircraft).

Ultimately, by the end of the war, different kinds of aircraft had come into existence which were the forefathers of modern aircraft used in militaries today. Aircraft used today play a massive role in conflicts and in how nations project their power, so understanding their history is vitally important.